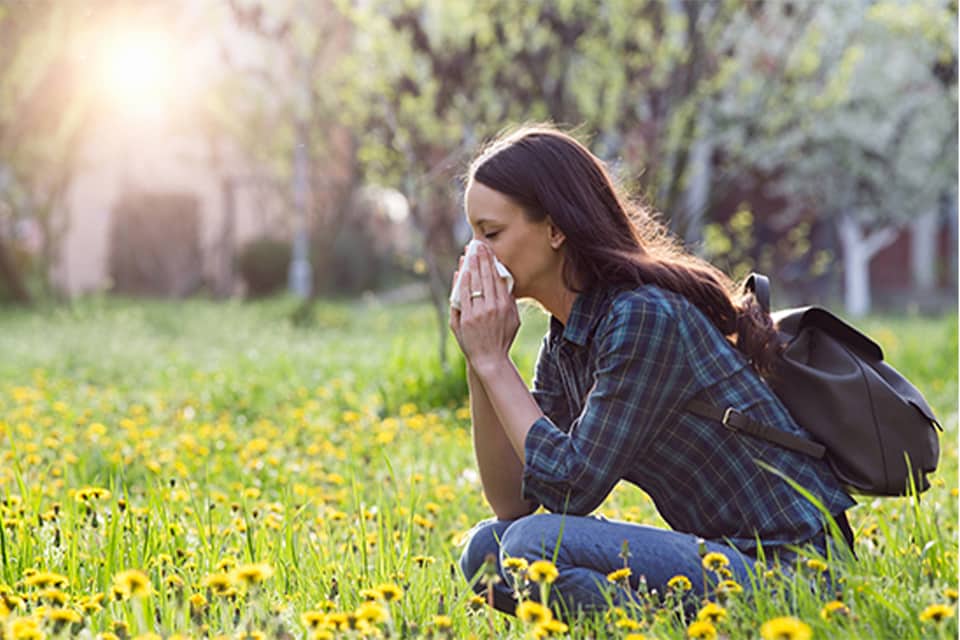 You’re just two weeks away from a seasonal allergy assault. Tame the worst symptoms now before they start.

As August heat continues to bear down, summer shows no sign of slowing. And while you may have weeks of grilling and outdoor fun ahead of you, fall allergies follow their own calendar.

Starting mid to late August, ragweed begins to bloom and spread its ultra fine pollen. One of the most common triggers of seasonal allergies (allergic rhinitis), ragweed pollen levels are highest in early to mid-September.

That’s just about two weeks away…

The good news is you can get a head start on controlling sneezing, congestion and itchy eyes—IF you call in nutritional reinforcements now.

A water-soluble nutrient found in many fruits and vegetables, vitamin C is the best-known vitamin and immunity booster. It also happens to be one of the most potent antioxidants.

It’s true that vitamin C support a strong, healthy immune system—but it also promotes respiratory health, collagen production for healthy skin and joints, and iron absorption. The human body can’t produce vitamin C. So it’s vital that you consume and absorb it in sufficient amounts through diet and supplements.

How Vitamin C helps with allergies:

When your allergic response is triggered, your body prepares to fight by producing histamines—biological bodyguards that flush away allergens. They’re the culprits behind your sneezing and watery eyes. Multiple studies indicate that vitamin C acts as a natural antihistamine by slowing down their production and minimizing your body’s overreaction.

Vitamin C helps in another way too. Surprisingly, low vitamin C levels are connected to allergic conditions. Oxidative stress is the “rusting out” of cells, and it plays a role major factor in allergic conditions. But, as a powerful antioxidant, vitamin C counters the effects of this cellular damage. So it’s no surprise that if you’re low in vitamin C, you may be ill-equipped to fight inflammation and allergies.

While it’s a good idea to incorporate lots of vitamin C-rich foods into your diet, such as broccoli, red peppers, cherries and leafy greens, you would need a significant boost in vitamin C to fight allergy symptoms. For a high dose of natural vitamin C, check out Body Kitchen’s Vitamin C Shield. It’s formulated with black pepper and quercetin to enhance absorption by an incredible 30%.

Arguably the king of plant foods, spirulina is blue-green algae with a robust nutritional profile compared to other water-dwelling plants. It contains minerals (copper and iron), B-vitamins, essential fatty acids, antioxidants, and remarkably, is made up of 60% protein plus all essential amino acids.

As a potent source of antioxidants, spirulina possesses powerful compounds that can help neutralize inflammation and free radical scavengers.

Because spirulina supports the body’s response to inflammation, it has shown to help reduce inflammation in the nasal passages and reduce histamines. A promising study revealed that spirulina helped to minimize common allergy symptoms, including runny nose, congestion, sneezing and itching.

Quercetin is a concentrated bioflavonoid—a plant pigment—found in red-purple foods such as raspberries, red grapes and red onions, as well as some leafy greens. Research indicates that quercetin has inflammation-fighting effects that benefit health in a variety of ways, including by supporting a healthy heart, blood pressure and blood sugar levels.

But it’s quercetin’s effect on allergies and upper respiratory health that make it a powerful ally against seasonal allergy triggers. In fact, one study reported on “quercetin and its anti-allergic immune response”.

Quercetin works by helping to regulate and neutralize mast cells’ action, making the immune system more effective at fighting pathogens but less likely to react to allergens. In other studies, quercetin’s antihistamine properties have been shown to support the body’s response to airway inflammation, as well as healthy liver function.

All three of these natural seasonal allergy remedies have science to support their effectiveness. But the key is to start early!

Our products are proudly made in the USA 🇺🇸

No free shipping? No problem. Shipping starts as low as $5.99

These statements have not been evaluated by the Food and Drug Administration. This product is not intended to diagnose, treat, cure, or prevent any disease. © 2022 Body Kitchen, LLC. All Rights Reserved.